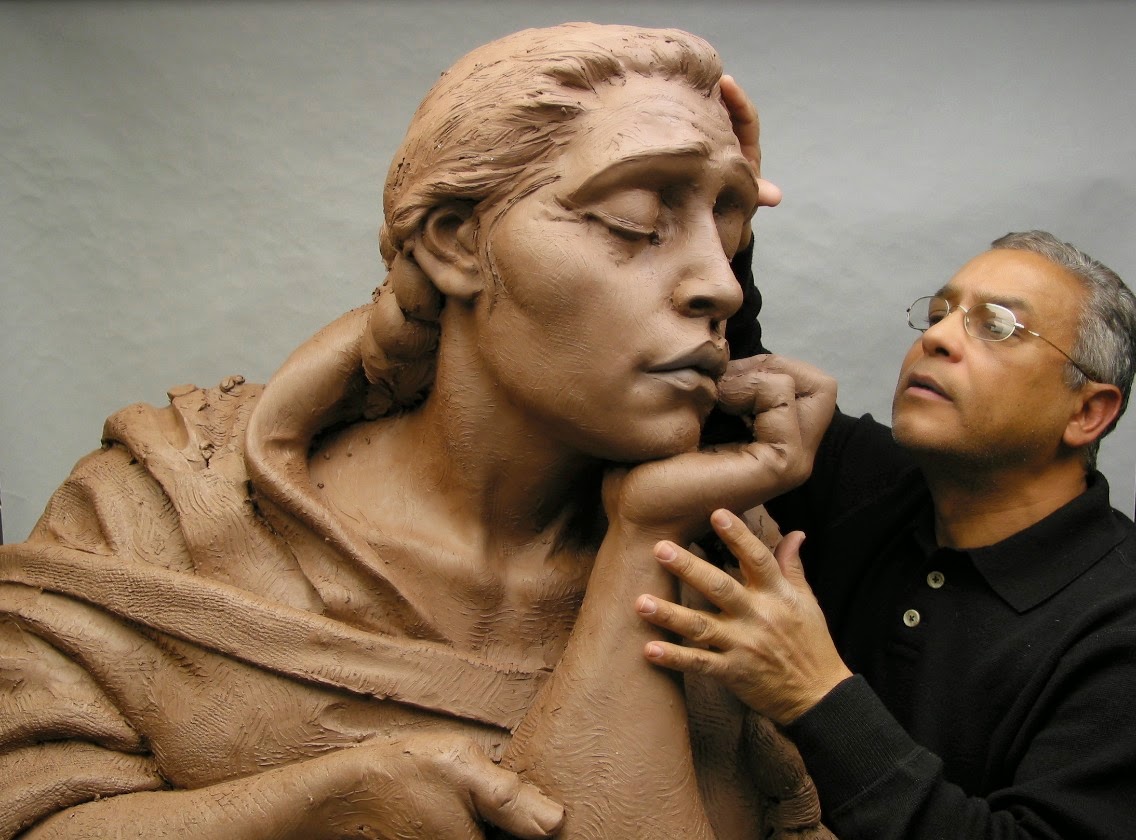 As a sculptor, Richard focuses on historical figures with social significance. His compelling sculptures capture the realistic figure, the social context and the spirit of the person. His work is in many private collections and can be viewed as courtesy of many public outdoor commissions.


Growing up in Philadelphia, you began taking Saturday art classes at Fleisher Art Memorial at the age of nine. What event or series of events ignited your interest in art? And what triggered your change of creative expression at age 15 from painting to sculpture?


I can’t remember a time when I wasn’t interested in the visual. My earliest memories were of my fascination in the pleasure of seeing and noticing things… everything. Things as simple as dust floating lightly in the sun’s rays. I think visual artists are uniquely sensitive to forms, color, texture, and patterns, which are the bare foundation of art and distinctly key to the visual dialogue.


This coveting of everything visual led quickly to drawing as a way of recording. Drawing is almost always the young artist’s first clue as to who they are. It provides an outlet to celebrate their world throughout their life.


By the time I was 8 or 9 years old I knew my drawing was more accomplished than my peers. The whole process of understanding what I saw and recording it seemed to come easier and with less frustration. All of this gave me great pleasure and still does.


Later when I was 12 -13 and I became more serious, I thought my drawing had to lead to painting, except I didn’t like painting with the intensity I had for drawing.  And that’s when sculpture came into my life. I was attending painting classes at the Fleischer Art Memorial in South Philadelphia, taught by my aunt Louise Clements, one of the most influential people in my life.


I stumbled on sculpture by happenstance when visiting the basement studios of the Fleisher art memorial. I fell in love immediately , it was the smells the physicality of the media and it all. I studied for the next few years under the tutorage of Frank Gasparro who was the head sculptor at the Philadelphia Mint.


You served as the President of the National Sculpture Society (NSS) from 2007 thru 2010 which is a different role than that of university teaching but they both are leadership roles. Do you see any similarities?
The roles of President of the National Sculpture Society (NSS) and Professor of Art at West Chester University (WCU) had some crossover but were generally very different. The Presidency role called for me to play a leadership role in guiding the NSS which is national organization of 3500 professional members. The time that I served as president of NSS was a difficult and transitional period. Direction was needed to move the organization forward but to keep some of the strong attributes that were part of our identity i.e The Sculpture Review Magazine. At this time most of the art magazines were going out of business or turning completely to digital publications. Our magazine is one of the outstanding art publications and it was deemed important by the membership to remain in print form.
As a professor at WCU I had to give direction and guidance to students, some of which had no experience in the plastic arts and others which were quite talented. The role of educator and mentor while very stimulating exercised a completely different set of demands.


In thinking about your extraordinary sculpture of Dr. Martin Luther King, your art celebrates a person’s legacy by defining a depth of character and a dramatic moment captured in time. What kind of research, preparation is involved?


My sculptural concerns have always been in reference to figuration and the human spirit. I’m particularly interested when I can use my art in public projects that commemorate social activism and correct or put history in perspective.


I start the creative process by delving into the history of my subject, probing through what facts I have at my disposal to piece together a mosaic of their lives. There is usually some nexus or series of circumstances that are pivotal to who they are, and why they invested their lives in the ways they did. The discovery and dimensionality that research brings to the projects adds strength to the forms. Often during these readings I find fascinating tidbits about future subjects.


For instance, a few years back, while researching material for The Frederick Douglass Monument, I stumbled upon several lesser-known but important social activists, scholars and abolitionists. Among these lost American Heroes were two fellow Philadelphians, Octavius Valentine Catto who was the founder of the first black baseball team, founder of the first Negro infantry, advocate and leader of the desegregation of public transportation, and educator. The other Philadelphian was Richard Theodore Greener. Richard Greener was the first black graduate of Harvard University, Diplomat to China, Secretary of the Grant Tomb Project, and Professor at University of South Carolina.


The more I researched the lives of these gentlemen, the more fascinated I became with the parallels in their lives and their impact on their times. Often larger than life characters seem to have an interconnectivity; a circuitous thread tying their lives together. Perhaps that’s why, despite the greatest of adversities these gentlemen were able to accomplish so much.


Actually I equate research as an integral part of the creative process for public commissions. As I mull over some revealing piece of information, I start to leave the logical to explore a more dimensional and intuitive processing of information. The same is true with the creation of sculpture. A process of following what you know to be true gives way to an endless series of “What Ifs”, each series of what ifs takes you at times, in completely different directions. I think of this process of tangential thinking, as similar to exploding fireworks, which then gives raise to the next array of explosions.  Later to be balanced by more linear or logical thinking.


With your public art do you prepare the work in a special way to protect from outside elements? Do any ever require onsite repair?


Its important with public commissions to protect the sculptures from the elements. Typically in this area unprotected bronze will tend to turn green which is part of the process of oxidation. To prevent this I use a hot wax technique. That is when the bronze is heated up after the patina has been achieved and while still hot wax is applied. the wax melts and absorbs to a certain degree in the metal and when it is cooled it is then buffed to the desired finish. This coat of protective wax is usually enough under most circumstances to keep the patina stable if it is done every two years or so. I have used commercial sealers which give a high degree of protection but are difficult to remove if any restoration is required.


I understand that travel is an important component in your creative and personal life. Can you talk about that?
I have always enjoyed traveling and visiting different cultures. I find the change in location to be very stimulating and I love the sound of different languages and experiencing different cultural traditions. And of course the art.


I prefer locations and countries that are different than the big cities in the states because I find that most large cities have more in common than not. I haven’t traveled nearly as much as I would like but I have been to Central America, Africa, Israel, Paris, Egypt, Mexico, Italy and China.  After traveling I always feel transformed and invigorated.

Has there been an artist whose talk/work has resonated for you?


I remember attending a lecture given by Isamu Noguchi in Philadelphia and I was struck by an explanation he gave for why sculptures were made. He said that one of the roles for sculpture, from pre-history to the present, was to create a kind of magic and sense of control. I believe that good sculpture has that element of the magical. It has to be transforming and take us on the artist's journey.


Your sculptures are massive and many weigh as much as a ton or more, As we get older in our golden years, our physical approach to creating art often changes, Have you made changes?


Have the golden years come? I am still looking forward to them. I hope I recognize them when they are here. I would say that the nature of monumental work and sculpture in general for me is a discipline of form and volume. It means that I may have to find different ways to do things because of the weight, but no my basic process remains the same and I consider the weight almost as an indelible part of the medium of sculpture. Actually, over the years my sculptures have gotten more volumetric.


I have adapted my process to more current trends. So instead of a steel armature I have my small models scanned and cut into foam which greatly reducing the overall weight. The clay is then applied and worked to the desired surface. I actually like this new way of working much more. It cuts down on time, cost and certainly weight in the working stage. In the end my monuments are bronze and stone and the weights of these remain constant.