An Interview with JUDITH LEIBER: From Survivor to Artisan to Fashion Icon 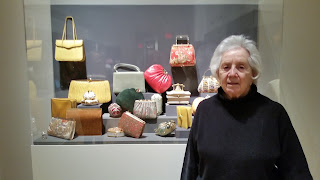 As a young Hungarian immigrant, Judith brought her skills, tools and passion for making handbags. Now over a half century later, her extraordinary handbags are in the  collections of the Metropolitan Museum of Art, The Smithsonian Institution, The Victoria and Albert Museum and also in their own unique museum on Long Island.


In Hungary, as a young adult during World War II, you and your family struggled to stay alive. Now many decades later, you have achieved remarkable success both professionally through your business and personally with a marriage to Gus (Gerson)spanning more than 60 years.  Do you reflect on those very difficult years and your life journey?

I try not to think about those days because it was really very difficult. We went through so much in five years of war but we are happy that we got over that and achieved success in the handbag business.  I was very lucky that Gus brought me here.


Since Jews were forbidden to study in a Hungarian university and you could not return to King’s college in London where you had just begun matriculation, you stayed in Budapest to be with your family and learn a trade.  You said “Hitler put me in the handbag business” and so your career started in Hungary. Can you imagine that your creativity, drive and technical acumen could have been channeled successfully at that time in a different profession?

Yes, Jews were forbidden to study in Hungarian University. And so my parents sent me to King’s College in London to learn chemistry with the thought that I would work in cosmetics because I had an aunt and uncle in Romania who made an enormous success with a cream called Flora Cream.

But funnily enough, I never got to really study at King’s College.  I just passed the matriculation and then returned to Hungary in the summer so that I wouldn’t waste my father’s money for the time that I wasn’t there.  I never returned to England because of the war.


You created a vast collection of the most exceptional artful handbags over many decades. Growing up did you realize that you had a creative flair? An entrepreneurial soul? Were you interested in fashion?

Well, I had a creative flair I suppose, but I didn’t really know anything about business although my dad had been in business all his life. He worked for a big bank and was very successful there. And he taught me how to handle things when you get into business; what you have to do in order to make a profit.  I learned that from him.

I always liked fashion but in Hungary there weren’t that many things that you could worry about with that.  My sister and I had two Lenci dolls that my parents got us in Italy.  And, when we were little, we even had paintings of each one of the dolls.  They were both girl dolls, and they were just wonderful.  But after what happened during the war, either they got lost, or we never worried about it after that.  You didn’t have the time to worry about things like that.

When I came to the States, I was, of course, very interested in what people were doing in the clothing business.  In the very beginning, I made bags right away that I thought would be successful to wear with clothes.  That was very fortunate.


You worked for different handbag companies until your husband, Gus, persuaded you to open your own business in 1963. First ladies and royalty have enjoyed wearing your bags as a fashion statement of status.

I worked for the most expensive handbag company.  When I went there, I went to the head of the pocketbook makers’ union, and I said to the guy “Whatever, you’ll send me up there, you’ll see.”  He said, “You’re not going to make it.”  But, you know, I thought, well, if they send me there, I’m going to stick there.  I’ll be all right.  And they had a pattern maker, a sample maker, who was the head of it.  And I was his assistant when I got there.  But after a while, he got very sick and couldn’t work anymore and they gave me the job. So I was doing everything.  First, I was just making all the patterns and the pieces.  And then, I even ran the floor at the end.

I worked there 14 years until 1960.  Then I went to work for Morris Moskowitz for a couple of years.  And my husband said, “You’re not going to work for these schnooks anymore.  You are, we are, going into business.”  Of course, I was scared to death, and we were scared to death about every problem that we ever had.  But, on the other hand, we made some wonderful bags, so we were a big success.  It was a small business, but we were very fortunate.  It took a lot of work, but we did it.  We worked very hard.

I also used a lot of antique frames that I copied and made animal bags: dogs, cats, bears and many shapes that were just somewhat classical.  And I made a very wonderful Tiffany style bag from one of the Tiffany windows in the Met and some other little bags that were also based on Tiffany which were very nice looking. One of the original Tiffany bags that I made was for Laura Bush for her second inaugural. The Pop Art I did was very successful; we sold a lot of them.


Which handbags or styles are you particularly happy with and do you wear them?

One of my favorite bags is a chatelaine, its a little purse shape which started me on making bags with rhinestones in 1967.  It’s still my favorite because it put me into the rhinestone business.

I have a very small collection at this point but you know if I ever wanted to wear a bag, we have a lot of bags upstairs.  We keep bags in cases very nicely put away, and I could always borrow one of my bags from the collection if I wanted to wear it.

Your bags span a vast range of extraordinary styles in elegant materials from leather to satin to metal (and rhinestone based) and a unique range of styles from classic to formal to Pop Art. Which designs have been the most challenging to implement?

All the designs I ever made started with an idea and then I made all the patterns for them.  I used all leathers: alligator, lizard, snakes, calves, suede, satin, oriental, obis, Indian ribbons from Mumbai. The Indians had these black robes that had colorful borders and we bought those borders.  And we put the silk or leather in between each ribbon and made it up like that.  They were absolutely wonderful after we finished them.

When I started out, we had four people.  Then we got a little bigger and had 32 workers in the factory.  After 1967 we started to make fully beaded bags, not just the one that was originally done.  I had a man who used to do the rhinestones for us and when that company went out of business, I took the best girl they had and she taught a lot of the other girls how to work on things like that.  We taught them how to do the beading and it worked out very well.  We had 100 girls just doing beadwork.

I never tried to do designs for men.  I had my hands were full with the handbags and the belts and the jewelry that I made.


Did you design costume jewelry or precious jewelry?

Yes, I had a small costume jewelry business when we started out but I said to my husband that we don’t earn any real money on it.  We stopped making it, even though he felt we should have kept it up, but we didn’t.  Then Harry Winston’s son, Ron Winston, came to see me and said I should design real jewelry.  So we did quite a bit in that, but once I sold the business, the man who bought it wanted the license.  So we told him “Fine, you use the license.  It’s yours.”


Before selling your business and retiring in 1998, you received numerous prestigious awards and the Smithsonian, the Metropolitan Museum of Art and other museums have your bags in their collections. Do you still design for your own pleasure?

I got a tremendous number of awards.  My first award was the Swarovski Award, which was a little glass piece, very pretty.  The Metropolitan Museum has 88 of my bags, not all of them are from me.  Some ladies gave them bags too.  And then I got the Coty Award in 1973, ten years after we were in business.  And then in the last year that we owned the business, I had the CFDA Lifetime Achievement Award.  And I also got a Lifetime Achievement Award a few years before from the Accessories Business.  And I had all kinds of other awards including a very beautiful award from the Moore College.

I don’t do any more work. You cannot make handbags without the factory.  You need people to put the stuff together right.  So you decide what you do and you can make the patterns wonderful, and then you have to have a shop to work on it.


You established The Leiber Museum in the East Hampton hamlet of Springs, New York to primarily showcase your work and the art work of your husband. Has this new venture been an exciting chapter for you?

Six or seven years ago, my husband built a museum.  He had a little help from an architect, but the bulk of the work, the ideas were all his.  The building is sort of Palladian and looks very nice.

We are showing not just my handbags.  There is a part of my work that is displayed permanently, but this year we also had a very large display of different kinds of bags, about 500, in the big room that usually is used for paintings.

It’s really a great little building and Gus is going to show some of his work next summer.  He’s working very hard this winter, making lots of paintings. He’s also going to have a show at the Carter Burden Gallery which only shows older artists who didn’t have large success with their work in the market.


Now at age 92, having had a remarkably long career, long marriage, long life and having built a large estate, what dreams do you still have?

As far as the future is concerned, we are now hoping to live long enough to have a 70-year marriage anniversary; on February 5th we will be married 68 years. We want to be able to enjoy our life and carry on for many more years.  And once we go, this museum is going to be endowed enough so that it will go on for a long, long time after we are gone.
Posted by Judith Zausner at 9:34 PM No comments: