An Interview with YVONNE BOBROWICZ: Fiber Artist of the Almost Ethereal 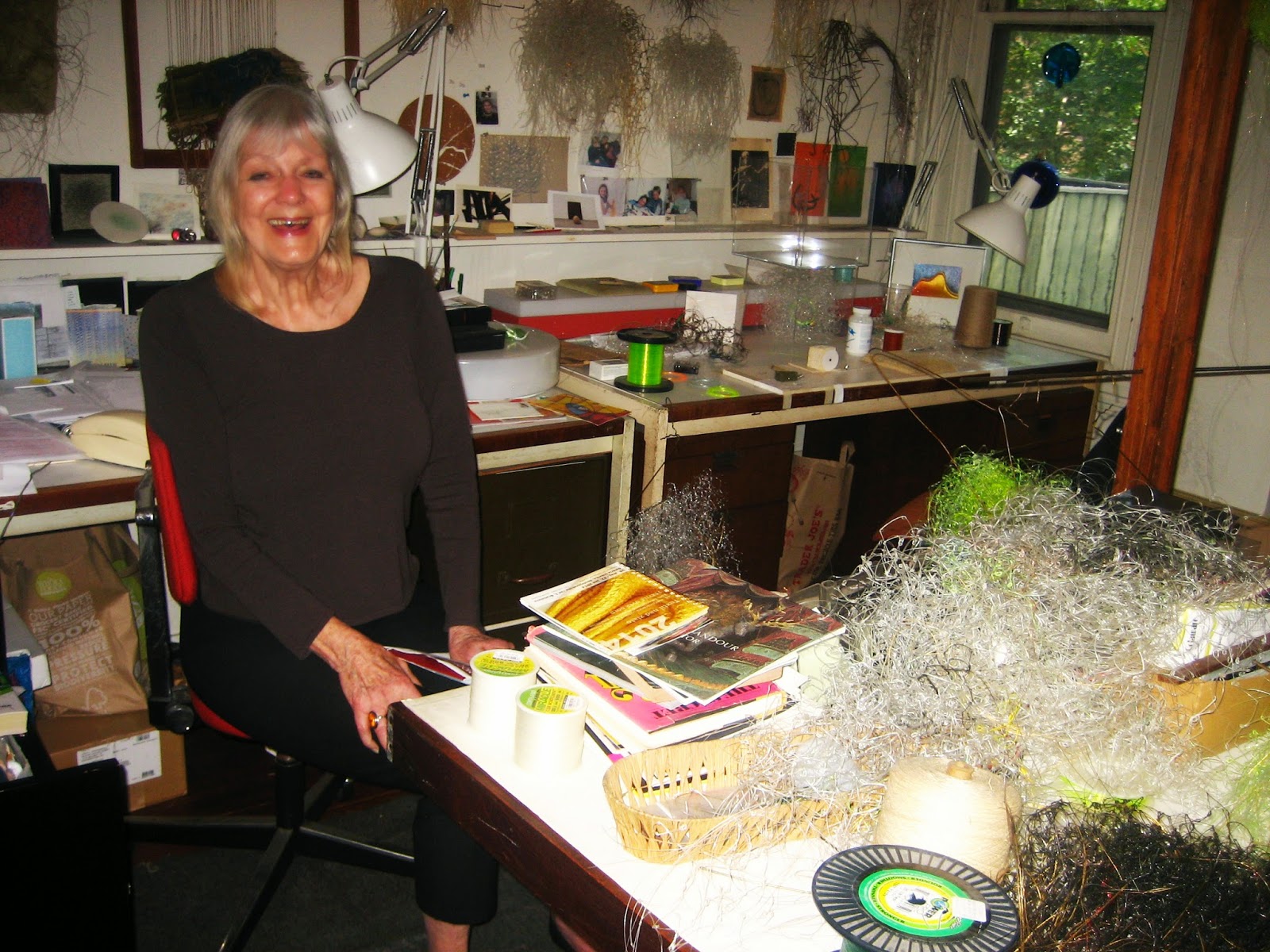 photograph by Judith Zausner
Trained in traditional textiles and weaving, Yvonne has found her path to an ethereal visual effect in fiber art.  By knotting enormous amounts of mono filament she creates a compelling experience of both light and texture.

You came from two parents with creative genes. Life had to enable that for you.

My mother had talent in the design and textile area and made clothes for me and my 2 sisters. She also could have been an actress. My father was a master woodcarver and taught woodworking.

My first weaving was when I was 10 years old at camp; it was a bath mat.

When I was in 7th grade I was asked what I wanted to do in life. That was unusual. I said that I wanted to be an Arts and Crafts teacher. I'm the teacher type; I taught at Drexel University from 1966 to 1997.


Was there a clear point when you knew that your direction would be in fiber?

Yes, it was at Cranbrook (Cranbrook Academy of Art), which was a very beautiful and inspiring place. It was there that I was exposed to all arts and crafts  and discovered "the thread". I was taught functional weaving and created suiting, upholstery, drapery and rugs.


And then how did you enter the world of fiber art after graduating from Cranbrook?

My father built a large loom for me which replicated the one at Cranbrook and that was special. And then I opened a studio designing and handweaving functional textiles for architecture and designer clients.


After you moved to Philadelphia with your husband, you had three children and continued working with your art while meeting some important people of the day

I moved to Philadelphia because my husband started teaching Architecture at the University of Pennsylvania (Penn). Penn was going through a metamorphosis and it was a very fertile and inspiring time. There was Buckminster Fuller, Lou Kahn, Ann Ting. LeRicole, and Louis Munford.

In the 50s I had studied with Anni Albers at the Philadelphia Museum School of Industrial Art (now the University of the Arts) and also wove. In the late 60's I started creating wall hangings,tapestries, room dividers, rugs with high and irregular pile that evolved in to floor sculpture. In the 70s I did work for corporations as well as a tapestry for Lou Kahn's Fort Worth Museum.

In the 60s there was a new craft movement which reflected what was happening in society. It was the women's movement, civil rights, space exploration and developing individuality. Lenore Tawney and Sheila Hicks are good examples of this new movement in fiber art. Jack Lenor Larsen did a show in 1969 at the Museum of Modern Art. That was incredible to have a fiber art show in a celebrated art museum that also included well known international fiber artists. It was an exciting time!

Processes go through change and I just go with it also. I had the good fortunate of being provoked creatively.

When I was about about 50, it was a rebirth time for me.I rented a loft and heard that DuPont was giving materials to artists  I went from weaving with heavy natural materials to light. I started knotting masses of clear mono filament that picked up light beautifully. In new ways of exploration, Flavin, Irwin and Terrill were working with light on the west coast.
I also started reading Jung and the Dao of Physics and many books by well known psychologists, philosophers, etc.


You had an exceptional upbringing and an extraordinary life. You won the Pew Fellowship and your work has been collected by museums such as the Chicago Art Institute, the Philadelphia Museum of Art, and the Racine Museum of Art.
Now at 85, how do you look forward?

I showed abroad frequently and I am still creating. Even though my body does not cooperate every day with what I want to do, I'm still working on these fiber pieces and continue to receive show invitations from overseas.

Exploring the CREATIVE WORLD OF PLEATS in Art and Function

Pleats have a history and in their history they have served as a mechanical function and also as an art form. The construction of a pleat is simply consecutive multiple folds in a material that can be sustained when ironed, stitched or otherwise fastened to secure it in place. There are 12 different pleat styles that have been documented and they are often identified by the width of the pleat and their placement in a garment.
The virtue of a pleat is its compact nature and ability to expand which provides purpose in both utilitarian items as well as in fashion and art. Consider one of the earliest fashion statements was made by the famous pleated collar of Mary Stuart.  It was actually referred to as the “ruff” collar probably because it created a rippling of ruffles around the neck; it was detachable and supported by a wire frame.  In 1634, the Dutch painter Rembrandt painted a portrait of vanHaesje v.Cleyburg which beautifully exemplified the ruff collar. In the next century, the Scottish pleated kilt evolved and was used initially by the British Army and then became popular with everyone..
Fashion has always had a love affair with the pleat. In the early 1900s, Fortuny a Spanish designer who grew up in Paris, created the famous Delphos gown. It was a shift dress constructed from finely pleated silk with glass beads that weighed down the fabric while holding its shape and also allowing it to flow on the body. His genius was not limited to fashion design; over a period of 30 years he patented more than twenty inventions.

In the 1930s, pleats were styled on pants for both men and women and with film stars wearing this new style, there was a new buzz in fashion. Fast forward to the present and there is wonderful artful play with fashion using pleats by designer Issey Miyake which are extraordinary and sculptural. By translating the pleated garment as an art object with a mechanical approach, Industrial designer/mathematician Li-Rong Liao created a pleated paper dress which fans out and looks like a cross between a prom dress and a lamp shade yet is constructed with compelling elegance .

For functioning pleated products, there is the accordion instrument which arrived here in the 1800s. It became popular for dance music because it generated loud sound and amplifiers were not developed yet. More pleated products with a long history that manipulate air are the bellows http://en.wikipedia.org/wiki/Bellows and the decorative hand fan (the oldest existing Chinese fans are bamboo and date back to the 2nd century BC). Using the pleat attribute of  efficient expansion, there are many products in many fields that can be identified. For example in the field of medicine, there is the surgical mask, the balloon catheter and even folded track doors separating room areas.


Yaacov Agam enjoys bridging art with technology. He is an Israeli artist who has generated work on canvas using the pleat to create a three dimensional approach to a two dimensional art form. He plays with illusion and color to engage the viewer. From each visual approach, the right, left and full front, every view holds a distinctly different play of colors, shapes and composition.


And finally there is the static pleat. Yes, a cemented pleat which is actually steps to a building but if it were in fabric it would be able to contract and expand. A wonderful example of this is the painted steps at the Philadelphia Museum of Art for the Dali show. Each step was painted with a part of the entire image in sequence. From a distance, the eye reads and unifies all the steps as one flat painting..


So many pleats in so many ways in our world. Extraordinary. Functional. Artful. Visionary. You be the discoverer.

Posted by Judith Zausner at 11:12 PM No comments: