An Interview with ISAIAH ZAGAR: Mosaic Muralist; "Mirror, Mirror on the wall....." 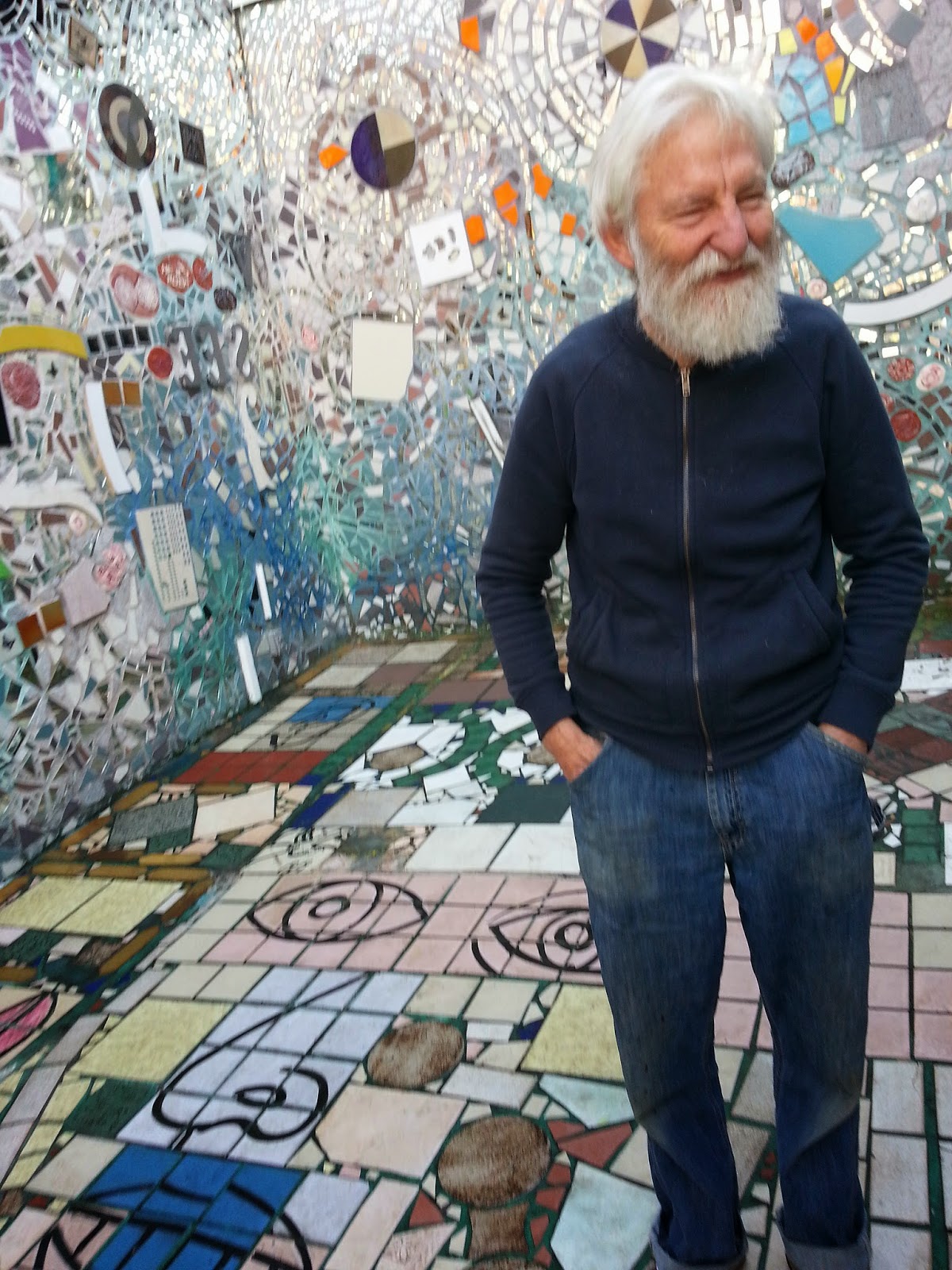 photograph by Judith Zausner
Isaiah’s Peace Corps roots and his art training at Pratt Institute are the subtle influences of his city wide mosaic murals in Philadelphia.  His most famous project, Magic Gardens, is a mosaic space created with broken mirrors and other recycled elements that surface walls and floors and are indeed magical.

I’ve learned that your first creative awareness, perhaps explosion, was when you were three years old. You were taught to color within lines in your coloring book but then promptly took the crayon off the page, to move it along the table, wall, and refrigerator. So from a primary lesson on boundaries you immediately pushed outside the boundaries. Perhaps this was your first mural of memory?

I don’t even know if I would consider that a mural.  Just feeling the textures of everything and being excited by the visual quality that was presented and that it was different than what was there already. It changed the paradigm and changed the way things looked.  Could you call it a mural? I don’t think you could call it a mural.  You could call it a place where empty spaces were filled with ideas and rituals. But in my case it was just a child scribbling, a graffiti process, a naming that said “I’m here … I’m doing this thing”. And of course it changed everything.  And of course my mother flipped out; she was appalled at what I had done and that was a fantastic eye opener for me. I saw the amazing changes that went on in her from seeing what I had done.

You can’t call it art but it was a creative experience.  It was to color … what I call total embellishment … the continuing and continuing without borders.

It was a moment in time that was very powerful to me and continues to resonate … I have very strong visual memories of the actual event.


After graduating from Pratt Institute and subsequently working as a Peace Corps Craft Developer, you had a personal crisis. You had a nervous breakdown and tried to commit suicide. Yet you turned this around when you began putting discards on the wall with cement and began your mural art. It is ironic that you have rescued these broken bits of mirrors ("My favorite material to use is mirrors because mirrors reflect the present") and pottery (began with his wife’s imported pottery and Eyes Gallery retail store) and elevated them to a new status and purpose just as the process of doing so brought you out of your mental health problems. Do you have thoughts on this?

Your description of it is very clear.  I don’t know what more I can add.

I was given a scholarship to take a class with Emanuel Bromberg, an artist and a painter. He saw something in my work and took me to visit the work of Clarence Schmidt.
Clarence Schmidt was an artist who was not an artist; he was a man who just created with discards. I was brought to see the folk art environment or the vernacular environment of Clarence Schmidt and it knocked me for a loop, my heart began to beat very rapidly.  The way I tell the story … there were no young women around so what does a 19 year old man say about his heart palpitating so fast at seeing something that was outrageous and different from anything that I had ever seen.  I just wanted to be there for a while.  I immediately climbed the fence and I went inside the structure and I was just knocked out by its insanity … its absolute insanity of what I had known to be art.  In fact I couldn’t even call it art … I didn’t call it art … I was just knocked out.

After the nervous breakdown, I had to rebuild myself as an artist. How could I be an artist after a nervous breakdown? That was in 1969 and I was 28 years old. I needed to find a place where I can be a Clarence, not worried about the marketplace, but living the life of the artist. I needed to find something so devastated that I can build it up from scratch and that became South Street.

I only wanted to create art … I didn’t want to deal with the real world.  I created a fantasy world – an art object that I created a la Clarence Schmidt with the same kind of impetus – using found objects, derelict materials, free materials, materials that I scavenged the world over.

Last year over 60 thousand people visited Magic Gardens and more have traveled through the city to see the other mosaic murals.

Your flagship mural, Magic Gardens on South Street in Philadelphia, is an extraordinary and large assemblage of many broken and recycled elements plus your own poetic and artful expressions ("I built this sanctuary to be inhabited by my ideas and my fantasies.") How do you maintain it? Does the weather impact it?

Yes the weather does majorly impact it.  The piece changes rapidly from year to year.  It has intrinsic in it a death knoll and whether we can stave off the death knoll forever is not clear because I was not and am not a structural engineer.  I worked with intuition and worked without much regard to the longevity of the project … always thinking that it was like abstract expressionism … that I could keep changing it – that it was ever changing. A project that could be continually reinvented – not only by myself but also by other people … that it could be kept moving and changing rather than a piece of art that was static.  I’m not sure about that anymore, whether the soul of it can remain intact with so many other hands involved in it.


Your art gives purpose to the recycled movement. As an honorary Dumpster Diver, you have inspired artists and aspiring artists to view trashed objects in a different way. Though you don’t go in the dumpsters yourself, your network of dumpster diver donors keep you actively sourced. How do you store all of these pieces until they are used?

Well I have a garage here that is useful and I have a big building in South Philadelphia that I have been working on for the past 7 years and it is a useful place to store a lot.  I’ve also run out of the energy to do reconnaissance missions to get materials.  I have essentially slowed down to a non-work stop, basically because I have so much that I have done.


I thought that I was skirting the problems of storing art because I was making the art in the street and when I was doing paintings on canvas I didn’t use stretch bars so that I could roll them up or I was even doing paintings on rice paper … that was as easy as pie … I would paint a big painting with several pieces of paper and I could roll it up and store.  However, no one was seeing any of these things … they were made and stored … even I didn’t look at some of them again.  I was having this tremendous problem – although I didn’t know it – of over producing.


The amount of work I have done is staggering. I was able to give one of the larger pieces to the Philadelphia Museum of Art (PMA) because it related to Anne DD’ Harnoncourt. I made this piece called ‘The Futurist’ because she was very involved in a show of the futurists. I made a big 10 x 12 feet mosaic that was accepted by the PMA as a gift.   I thought this would be the beginning of the possibility of moving these big panel mosaics, some as big as the wall.
And your work is all about exploring boundaries on different levels. In creating mosaic murals, you use lots of broken mirrors and glass; those pieces have changed from their original state to one with broken boundaries. Then these pieces are placed in assemblage to create a mural where the boundaries merge and disappear with other elements and they radically challenge conceptions of what a building wall should look like. Do you consciously explore boundaries in making art?

I just finished one for a fitness center on between 7th & 8th on Reed Street and it’s a long mural – about 200 feet long by 7 feet high and it has its boundaries, it doesn’t go all the way up through the building,  it just has its boundaries on one level.  Although it has figures that begin at the feet sometimes and only end at the middle of their bodies … you can imagine that it could go to the next level.

Magic Gardens is in the center of a big city and it’s on a street that is known for its idiosyncrasy, it’s movement of hippies and how they changed the way people looked at things.  It has an identity that people want to see before they even know about Philadelphia’s Magic Gardens.  They want to come to the street so they do happen upon the garden and if it was in some outlaying area that didn’t have that reputation then it wouldn’t have the power that it has … the environment … the placement of an art object is so important.

You have completed over 130 outdoor murals AND, in doing that, covered more than 50,000 square feet of Philadelphia. This is an enormous art legacy. Now at 74, have you scaled your art to less physical installations? What’s on your horizon?

I don’t know what the future will bring at all.  I have rebounded several times from complete breakdown failures [mental that pushed into the physical]. Now I’m in another one; I’m not whole yet and I don’t know if I can get whole.   And so I can’t prognosticate about the future without the feelings of the present.  That is how one thinks about the future.

Posted by Judith Zausner at 4:49 AM No comments: