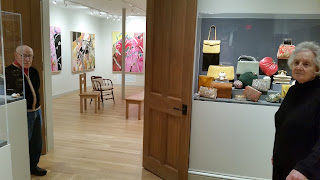 Gus and Judith Leiber inside the Leiber Art Museum in Springs, NY


Art museums are those venerable big buildings that house collections of esteemed art which are carefully selected, protected and made available for the public to view.  Although a nonprofit business structure, usually admission is charged to offset its operation and donations are aggressively sought to augment its collections and bottom line.

Many of these museums are famous for their legacy of providing collections to be viewed over centuries. The Louvre in Paris is the biggest museum in the world and was initially built as a fortress in 1190. Having gone through many changes over centuries, there was a period of time when Napoleon renamed the Louvre to Musée Napoleon. So there is a history of personal identification to collections of art.

“The balance in the art world is shifting. As the world’s richest private collectors get richer, publicly financed museums are, by and large, getting poorer.”

Today many wealthy individuals have chosen to create their own unique museums for public exhibitions. There are variations of the privately created museum as benefactors have chosen to have greater control of their collections and, as a business, enjoy tax benefits.

The Eli Broad Museum  in Los Angeles is housed in a spectacular building designed by by Diller Scofidio + Renfro in collaboration with Gensler. It showcases 2,000 works of postwar and contemporary art and is uniquely poised to offer free general admission. Founded by philanthropists Eli and Edythe Broad, the museum covers 120,000-square-feet and through The Broad Art Foundation, it maintains a worldwide lending library which has provided more than 8,000 loans to over 500 museums and galleries around the world.

Michael and Susan Hort host their collection within their private living space; one floor is for living and the other three floors are for exhibitions and storage. They “open their art-covered 17,000-square-foot spread of their downtown home to hundreds of art-worlders, who come to peruse the couple’s collection of more than 3,700 works of contemporary art.”

The Museum Ludwig in Germany had an unusual beginning. In 1976 Peter and Irene Ludwig and the City of Cologne “signed a donation contract founding the Museum Ludwig. The contact stipulated that the couple would donate 350 works of modern art and that the City of Cologne would in turn erect an independent “Museum Ludwig” for these objects created after 1900.”. The museum was the recipient of major donations of art and has the third largest Picasso collection in the world.

Judith and Gerson (Gus) Leiber are artists who, after retirement built The Leiber Art Collection in East Hampton, New York . Unlike other private museums which exhibit a range of celebrated artists, this beautiful building contains works that are created solely by its benefactors: Judith and Gus. Judith is the well-known handbag designer with her purses in museum collections worldwide and Gus is a celebrated contemporary painter. There is no admission fee and visiting hours are somewhat limited.

Whether a museum is public or private, we are fortunate that individuals have chosen to collect, protect and exhibit the work of extraordinary art.

The only way to understand painting is to go and look at it. And if out of a million visitors there is even one to whom art means something, that is enough to justify museums.
-Pierre-Auguste Renoir

Give me a museum and I'll fill it.
-Pablo Picasso
Posted by Judith Zausner at 11:31 PM