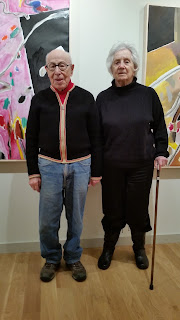 JUDITH AND GUS LEIBER
Married 70 years as of February 2016

Artists have a reputation for being temperamental and difficult but they also come with a sharp focus and passion for the visual. I believe that their creative drive suffused with their thirst for art in all directions is the critical bond that artists have in common and that personal energy and commitment are what keeps a marital bond strong. Also since they share the profession of being an artist, there is a mutual interest and respect for each other's art that keeps their love alive year after year.

Here are couples who defy odds of the gravity of aging and the vicissitudes of love:

Judith and Gerson (Gus) Leiber:
Both Leibers are approximately 94 years old; she is a world renowned handbag designer and he is a modern expressionist painter.They met in Budapest when he was a GI after World War II and she was living with her family. Now married about 70 years, they are an extraordinary example of adoring love and devotion to each other.

Iris and Carl Apfel:
Iris is a self professed "geriatric starlet" and her fame and good fortune has grown tremendously in recent years. Iris, 93, and Carl, 101, met at a resort hotel in Lake George when they were young; their first date was on Columbus Day and they were married on Washington's birthday.He says it's been "one trip, beautiful trip”. Both were in the arts and launched Old World Weavers, a textile company for which they sourced and designed for globally to satisfy their famous clients.I would candidly estimate that they are married, extremely happily, for about 70 years.

Alice and Richard Maitzkin:
Now in their 70s and joint authors of the award winning book "The Art of Aging", they are both engaged in portraying art through the lens of the aging process. Married about 32 years, Alice is a portrait painter and he is a figurative sculptor using clay.They met at a friend's home, immediately became inseparable and months later were married in India.

Leona and Nelson Shanks:
Leonia was introduced to Nelson in 1984 by the then curators of the Philadelphia Museum of Art. Married in 1989, they are both very active painters and in 2002 they co founded Studio Incamminati in Philadelphia which provides advanced instruction in classical realism painting. As realist painters and Studio Incamminati teachers, their daily lives are completely intertwined.

Susan Rothenberg and Bruce Nauman
Also married since 1989, Susan is a contemporary painter and Bruce's work crosses a range of mediums including sculpture, photography, neon, video, drawing, printmaking, and performance

Aline Kominsky-Crumb and Robert Crumb:
Aline and Robert met in 1971, they were married in 1973 and are happily ensconced in a large estate in the south of France. Robert, an underground comic artist is the originator of Fritz the Cat, Mr. Natural and Devil Girl and says of Aline: “She was the first woman I met whose emotions didn’t scare me". With Aline, also a comic artist and the business woman behind their art, they have a daughter Sophie who is, yes, also a comic artist living in France. Aline and Robert have an open marriage that has given them freedom to maintain other spousal type relationships.

April Gornik and Eric Fischl
They were two painters who met at the Nova Scotia College of Art and Design in 1975. Their first interaction was a flirtatious move with food by Fischl who now is a believer that “Art and food are intimately tied together.” Eric is known for his work as a painter, sculptor and print maker and April is a landscape painter. They enjoy healthful gourmet eating and frequently host dinner parties in their Sag Harbor home.

Yvonne and Joe Bobrowicz
Now married almost 65 years, they met at Cranbrook Academy of Art where she was studying textiles and he was working in design. Yvonne began her studies with traditional functional textiles and over the years her art evolved to etheral fiber pieces using monofilament. Joe worked in architecture as well as design and taught at the University of Pennsylvania. His seldom seen design work such as the jewelry he created for Yvonne is quite extraordinary.

Roberta and David Williamson –An early meeting as teenagers almost 50 years ago has catapulted to a successful joined career as artists. They create jewelry and sculpture and have uniquely adorned their home with their own work as well as other choice pieces of art and ephemera. They are both advocates of change and their home reflects their sense of continuous renewal.

Marriages, like careers, need constant nurturing... the secret of having it all is loving it all.