An Interview with CLAUDIA CHASE: Designer & Founder of the Mirrix Loom 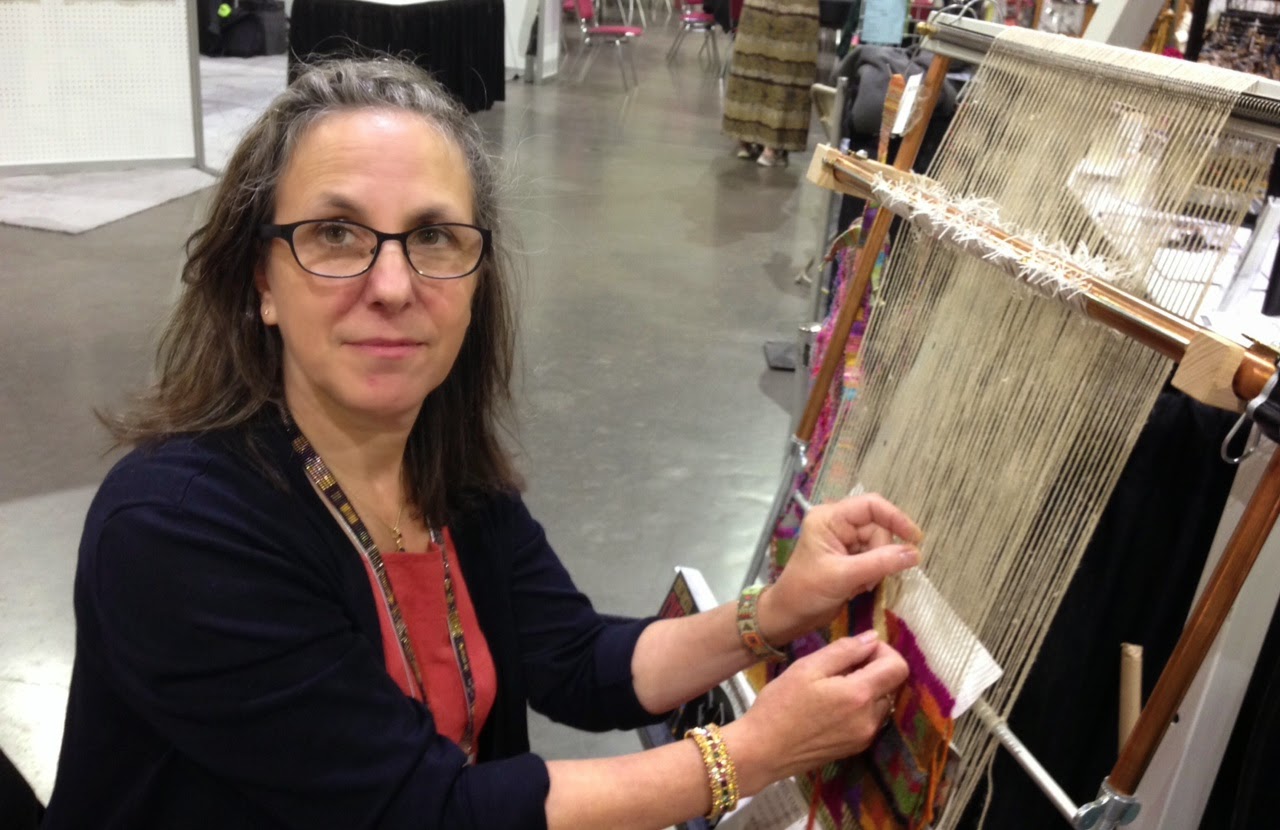 Weaving is an ancient craft that may be traced to the Paleolithic era. The basic technique is to intersect yarn or threads that are at right angles to produce cloth. A loom is usually an important component of this process because it provides the support and tension to facilitate weaving. There is an enormous range of resulting fabric possibilities which depend on the loom, the threads/yarn used and of course the vision of the weaver.
Although there are many types of looms for handweaving such as the classic multi harness looms, backstrap looms, inkle looms, etc., until the Mirrix was born, they were all traditionally made of wood. This new loom was designed like a gleaming spaceship to be strong, portable and to accommodate both the tapestry weaver and the bead weaver. It’s a revolutionary product and its designer and founder, Claudia Chase, 57,  talks about how Mirrix became a creative success.
AN INTERVIEW WITH CLAUDIA CHASE


You designed the Mirrix loom from the vantage point of a weaver-on-the-go. How did that happen?
As I became more and more involved with tapestry weaving, I purchased two rather huge floor looms. And although they worked quite well (but were very difficult to set up, often taking more than an entire day) they were firmly planted in my studio. I wanted a small loom that I could take places the way one can take one's knitting or crochet anywhere. But the only extant small looms at the time just did not do the job well. They felt more like toys and the resulting weaving always disappointed me. So I talked to a friend who is good with his hands. He took my ideas and the stash of metal he had in his garage and after a few weeks of back and forth and new ideas and changes, the Mirrix prototype was born. It was made of fire truck trim and copper plumbing pipes and it was beautiful.

Can you describe the difference(s) of your first prototype of the Mirrix loom to the ones now on the market?
The Mirrix prototype is not that much different from the Mirrix Loom we now sell. The main difference is that we have refined the details so although the current Mirrix Loom looks very similar to the prototype, the details are greatly enhanced and improved. For example, the prototype handle was bent by hand, dipped in plastic and cooked in a regular oven. Now we order hundreds of handles at a time and have them professionally plastic coated. The brass pins in the shedding device that hold the rods are laser cut to exacting precision whereas the first ones were little metal loops.


Do you manufacture the looms locally?
Mirrix Looms are not only made entirely in the US, but are milled and assembled at Sunshine House, which employs mentally and mentally/physically handicapped adults. Commitment to perfection is obvious the moment you open up a Mirrix box. Our employees deeply care about creating a quality product and they infuse each Mirrix Loom with their amazing work ethic. We at Mirrix feel blessed to be a part of such a wonderful operation.

ow did you select the name” Mirrix”?
I made it up. I think I based it on an Italian verb that means to mirror and then made catchy by adding the "is" noting that a lot people don't ask for a tissue; they ask for a kleenex. The same goes for Mirrix. People seldom say "I am weaving on my loom." Rather they say: "I am weaving on my Mirrix!"

At some point along your life’s journey while you were developing the Mirrix company, you also served three terms as a State Representative in the New Hampshire House. What was the trigger for this initiative?
My daughter discovered that a mother and her daughter had served in the New Hampshire House and she suggested we should do the same. But since she was in college, I thought it might interfere with her studies so instead I ran for office and she ran my campaign. Elena exhibited her grasp of marketing at that point. No red, white and blue for us. Our color scheme was magenta. You could see our signs lining Main Street from miles away. Our bumper stickers were home printed on holographic paper. And our t-shirts were works of art we hand painted. Apparently, we got noticed because I was the first Democrat to win this seat since the Civil war and the first female Democrat to ever win it.


Are you still actively involved in politics?
Six years was enough. During that time Mirrix took a back seat and sales declined. Once Elena came on board as our Marketing Director I once again made Mirrix my single focus. So although I still follow what is going on in politics and always have a very strong opinion, I no longer feel compelled to physically get involved.

Your daughter works in your business also. What separate roles do you have?
My job is to run Mirrix in a general sense which means dealing with the books, answering phones (although I do have phone phobia and it's a lot better to first try to reach either Elena or me via email), processing orders, ordering inventory, paying bills . . . . business stuff which at times I enjoy and at times I hate. My job is also to design new products both hardware (looms and loom accessories) and software (the bead and fiber kits). Additionally, I do a portion of the customer service. Elena is our Marketing Director in every sense of the word. She has swooped us into the modern age. Our online marketing can only be described as cutting edge and ever evolving. Elena is also working on her masters in the field on online marketing, so we have the best there is in that department. She is also the web guru (a job she did part time for many years before joining Mirrix full time). Her other jobs spill into other areas as well. She has been known to design new kits, deal with lots of customers and generally do whatever it takes whenever needed to make sure Mirrix runs smoothly. And since we can pretty much read each others' minds most of the time, our working (and personal) relationship is rather seamless.


What struggles have you had as a business owner of a new craft product?
It's been a long and interesting journey. Convincing established yarn stores to carry the Mirrix loom was actually quite easy. Convincing Bead stores was another story altogether. They just couldn't see why a bead loom would cost more than $20. Whereas the yarn stores, who are used to dealing really expensive equipment, saw the Mirrix as one of their really affordable looms. Marketing to the world at large has been a fascinating work in progress but has never been so fun or so successful until Elena joined us full time.

What is your vision for Mirrix Tapestry& Bead Looms,Ltd.?
To continue in the direction we have been going in since Elena joined us full time. One of our first slogans was: A loom in every lap. That's not a bad goal. We really want to spread the word about the joy of weaving and the fact that on the Mirrix loom you can weave just about anything. We also want to continue to have fun running Mirrix. We will be doing more classes (in person and online), some television shows, etc. in the future. Elena keeps saying "what if?" and then she makes us do it!

Posted by Judith Zausner at 6:06 PM